Anticosti Island’s white-tailed deer hunting is an experience unlike any other hunt found in North America. Where else can you hunt a white-tailed deer in a stress free natural habitat where there are no predators, has not gone fully nocturnal, and sometimes has never even seen a human being? Better yet, you will never bump into a fence or someone else that shouldn’t be there. You might see a hunter and his guide driving between sectors on our private roads. Imagine a private deer hunting nirvana with access to 215 square miles of unique white-tailed deer territory. You will have the opportunity of hunting alone, with no sounds but the wind, water, the birds and maybe the grunt of rutting bucks. This is the charm of the island and why the same hunters are coming back to Safari Anticosti year after year. 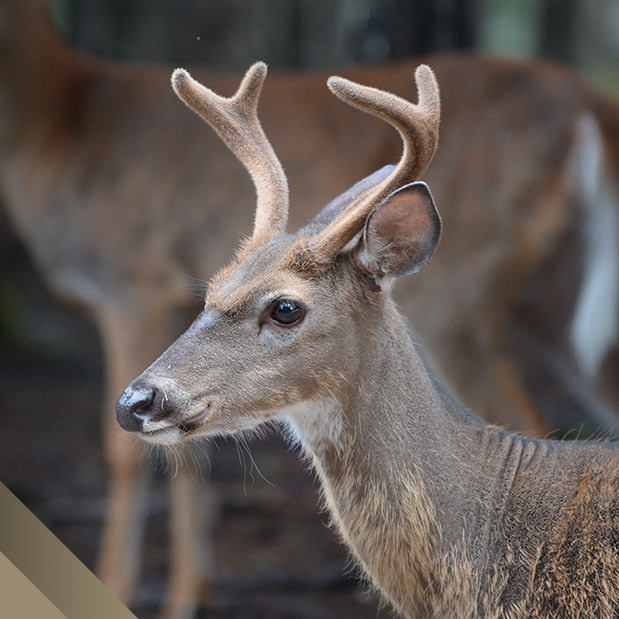 During the month of October, the bucks are more reclusive. They tend to hold in dense thickets with very little daily movement while fattening up prior to the rut. During this period, the hunting can be very tough. For this reason, Safari Anticosti ceases its deer hunting operation for the month of October. Once November rolls around, the annual rut kicks in and the bucks begin chasing the does. The bucks cover great distances during the day and can be seen just about everywhere. Rattling and calling is a very effective hunting strategy on Anticosti Island. With a very good density of deer per square mile, you can make a lot of blunders and still tag out on 2 deer. You will really learn how to hunt white-tailed deer while refining your tactics.

You will have more close encounters on a single hunting trip to Anticosti Island than most hunters will have in a decade of deer hunting elsewhere.

While it is true that there will be opportunities for some long shots along the river banks, across a bog or maybe on the side of a road, the majority of Anticosti deer are taken at less than 200 yards with many shots that are less than 50 yards. The forest can be very dense at times with black spruce stands dominating the tree cover on the island. Blowdowns, resulting from the heavy winds encountered on the island, are everywhere, creating tiny clearings here and there. Rifle calibers such as the 30-06, 308, or 270 are more than adequate. Rifle actions are a question of choice but many hunters on the island prefer the standard bolt action rifle. Repeating rifles such as pumps or semiautomatics have their place on Anticosti Island in the hands of hunters accustomed to shooting at running deer. Of great importance is the choice of your rifle’s optics. The variable scope with a magnification from 2 to 7 power is ideal to handle the varied shooting distances. 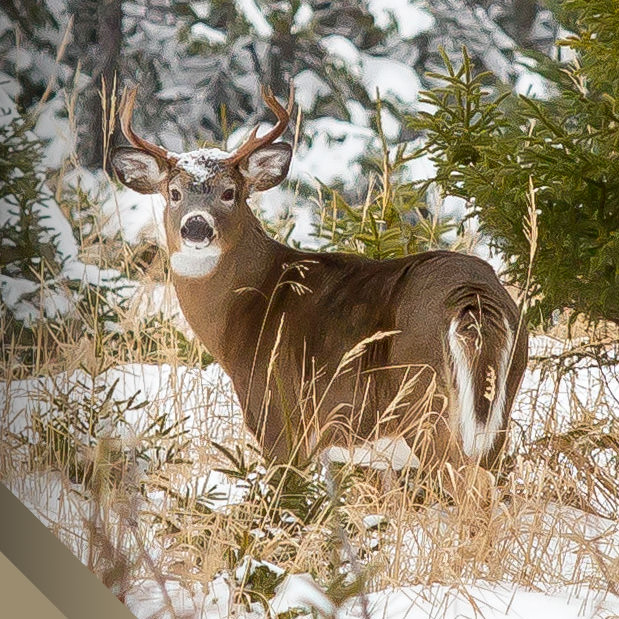 Both Boone and Crockett and Safari Club International record book societies have been lobbied to list Anticosti deer as a distinct sub-species. Recently, Safari Club International agreed to this request and now has a listing for Anticosti white-tailed deer as a distinct sub-species. During the 2008 hunting season, we harvested the new number 1 S.C.I. record book buck which scored 146 5/8.

On Anticosti Island you will:

Experience deer hunting as it was 150 years ago in North America…!

Our Anticosti deer hunting strategy is all about still hunting or the stalk, walk and spot method. We have very few stands. There are, however, ground blinds and elevated stands that have been erected for hunters with limited mobility. To facilitate the still hunting methods of our deer hunters and to allow access to as much of our hunting territory as possible, we have developed a network of stalking or still hunting trails. These trails have been purposely selected and prepared by our guides to help access various deer habitats and productive areas. Hunters have the option of hunting alone or of being accompanied by their guide. The entrances to the trails are found along our private roads in the zones that have been designated for each lodge or chalet. The trails are numbered at their entrances and marked for easy navigation. Generally, the hunting trails have been designed to allow you to continually hunt new areas without having to retrace your course. By following the markers, you will return onto a road and then be met by your guide. The hunting trails have also been cleared to a width that allows the passage of your guide’s ATV to help recuperate any deer that has been taken near the trails.

No matter which sector you hunt, you will see deer. The quantity of deer varies annually, governed to some degree by the time of year, the previous winter conditions and the seasonal weather. In early September, the deer are generally in their summer routine, grazing early and late in the day, throughout the vast bogs and burnt areas scattered around the island.

Gearing up for the weather…

You will likely be doing a fair amount of walking, so watch the weight of your equipment and choose your garments and boots accordingly. Early season, in September, the temperature can soar towards mid-day and cool rapidly in the evening. Late October can range from cool to cold while November is cold with probably snow on the ground. Remember that you are in the Gulf of the St. Lawrence and subject to the cold air from the Labrador Current that surrounds the island. The weather can be very nasty at times with heavy winds, fog and rain.

The population of white-tailed deer on Anticosti Island is the result of an unprecedented biological experiment that took place in 1895. Mr. Henri Menier, a gentleman from France, released 220 white-tailed deer on the island that had been captured live from mainland Quebec. The deer thrived and from this original count the herd now numbers over 50,000 heads.

The deer of Anticosti are the most north-eastern white-tailed deer of North America. Typical of this species, the deer have readily adapted and evolved with the Anticosti’s coastal environment. Their introduction to the island and subsequent population growth has modified the ecosystem, plant life and fauna of Anticosti. Once known for its abundant black bear populations and hunted for centuries by the local natives from the north shore of Quebec, the black bear is now extinct on the island. Anticosti is completely void of any predators. The overgrazing of the ever increasing deer population wiped out the rich wild berry crops that the bears depended on to fatten up before the long winter months. The last black bear was sighted on the island in 1998. Basically, the main population control on Anticosti’s deer herd is the impact of Quebec winter.

The deer have also had a detrimental effect on the indigenous balsam fir trees and other plant life originally found on the island. Primarily used as a winter food source, balsam fir management measures have been undertaken by the Quebec government to help maintain and increase this evergreen’s presence on the island.

A mature Anticosti buck weighs between 165 lbs to over 200 lbs on hoof. The standard buck’s antler consists of 8 typical points with an antler width between 16 and 18 inches. We harvest many deer that exceed these averages every year. As with any species of deer that have evolved in very different environments, hunters will notice slight differences in the basic morphology and look of the Anticosti white-tailed deer

Safari Anticosti now owns only the Salmon River sector in the northeast of the island.  On this territory, two establishments can welcome fishermen or hunters according to new basic requirements. The Safari Lodge, an American Deluxe plan for which we require a group of at least 8 hunters or fishermen for a maximum of 12 […]

IMPORTANT UPDATE IN REGARDS TO COVID-19

Vaccination Passport To Be Introduced on September 1 The Quebec Minister of Health, Christian Dubé, presented on Tuesday the terms and conditions of the vaccination passport, which will be implemented on September 1. The increase of cases in the province, the progression of the Delta variant, the return to school and the anticipation of a […]